A trackball mouse has been used by many and has passed the test of time. Whereas most technology doesn’t live longer than a few years, the trackball design has kept on being made new. There are a variety of reasons for this, including that this type of mouse requires far less desk space than a traditional laser mouse. This is due to not needing to move the mouse around to interact with your computer.

Though they will likely never be the top choice of hardcore gamers, trackballs have proven to be a favorite favored by others. From business users to casual internet users, many people enjoy their ease and ergonomic benefits. If you have ever spent a long time at your computer, you know that after a while, you begin feeling wrist pain and a stiff shoulder or elbow. This pain is due to the position you hold your arm in while requiring subtle muscle tension over long periods. Using a trackball to interact with your computer requires much less arm and wrist movement. The reduction in movement results in greater endurance for long periods of usage.

One of the most common injuries computer usage leads to is RSI. RSI, which stands for “repetitive stress injury,” is more accurately considered wear and tear than an actual injury. RSI is a gradual accumulation of damage to your nerves, tendons, and muscles from repetitive motions. Using a trackball mouse instead of a traditional mouse can help decrease the repetitive motion in your wrist. That repetitive motion often leads to RSI or carpal tunnel. With this in mind, we are going to discuss three great options for those of you considering moving over to a trackball mouse. 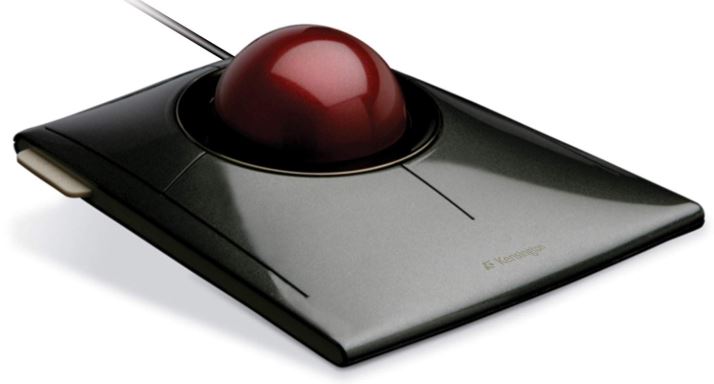 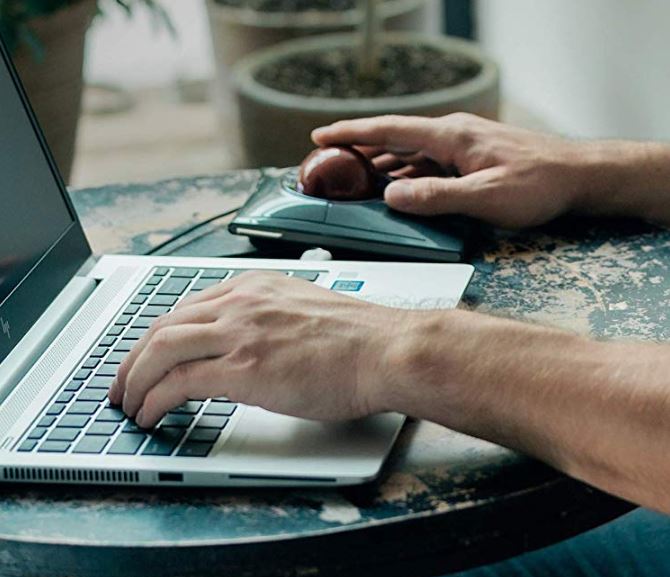 The only thing about this mouse that’s stuck in the past is the wire. There are many out there that say a wired connection results in better response times. However, you can only really tell the difference when you are engaged in fast-paced gaming; otherwise, modern Bluetooth technology is fast enough as to be indistinguishable in performance. Naturally, the cable input is USB with an auto-installation of the mouse drivers upon connection. You will still need to install the separate Kensington customization software if you wish to use the button configuration options. 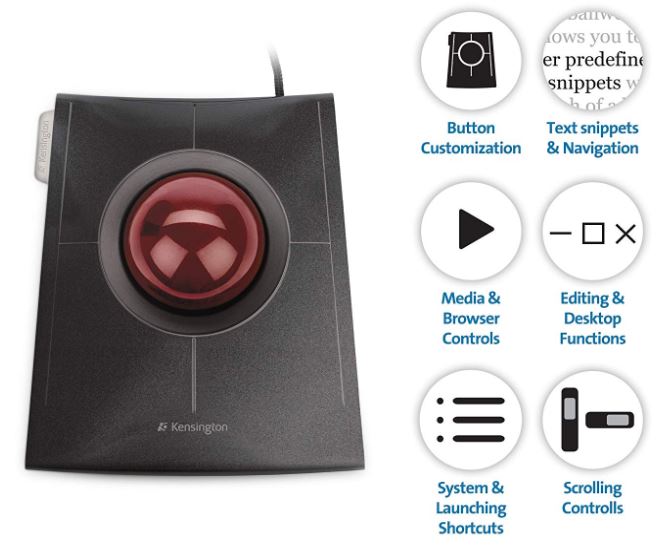 The Kensington Slimblade was designed to be ambidextrous. Whether you are left-handed or right-handed, you can utilize the SlimBlade efficiently due to the central location of the trackball. Most mice, especially gaming mice, are no longer being designed with symmetry in mind, so seeing that here is refreshing.

Often, you see grooves for the right thumb and buttons explicitly placed for a right-handed person. Kensington trackballs go against this trend by being both low profile and horizontally symmetrical. The mouse has a total of 4 buttons, 2 north of the trackball, and two south of it. As far as total size, the SlimBlade measures 6 x 5 x 3.5 inches. 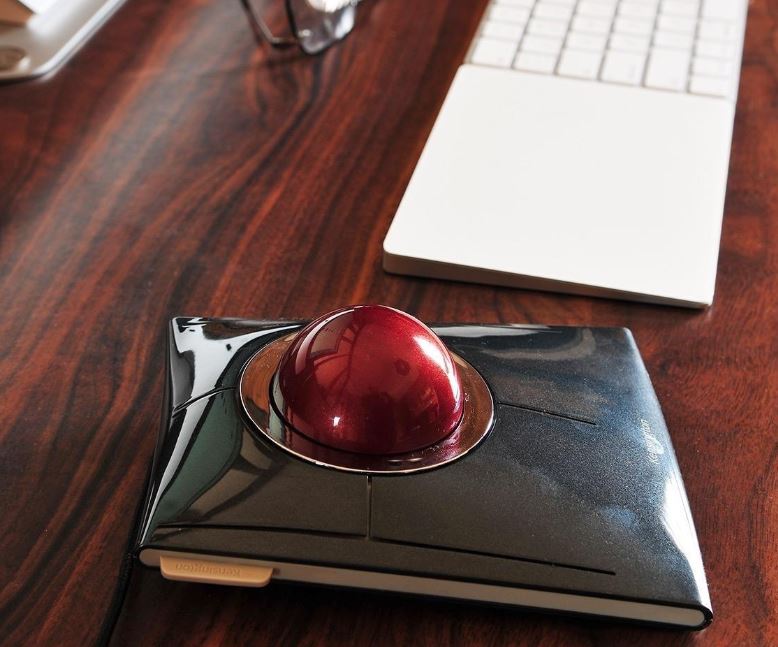 The SlimBlade uses a massive 55mm ball that’s tracked on both the X and Y-axis. It utilizes multiple lasers for incredibly high accuracy and cursor control. The mouse also has custom software to control each of the buttons. It also enables you to customize your mouse speed to match your personal preferences. The trackball on the SlimBlade is quite large and weighs about as much as a pool ball. For the video or music editors out there, the trackball offers much more accurate micro-movements than a standard mouse. With the larger size of the ball on the SlimBlade, you can get incredibly high levels of control.

One excellent feature that takes this mouse up a notch is the fact that they removed the scroll wheel. Instead of utilizing a scroll wheel, they built the functionality right into the trackball itself. A great feature is the ability to rotate the ball clockwise and counterclockwise to scroll up and down a page, respectively. 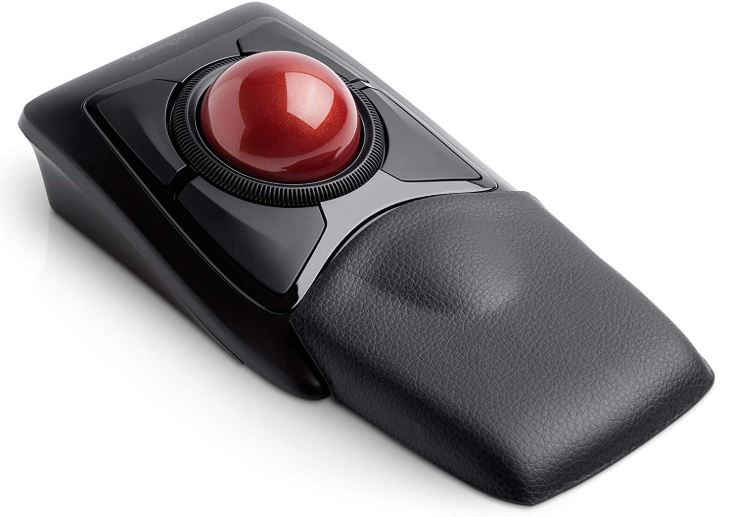 At first glance, the Kensington Expert Mouse is everything the SlimBlade is but with the bonus of being wireless. Despite the freedom of a wireless connection, you lose some of the things that made the Slimblade great. Mainly because it utilizes some older technology than it should have. You still get the excellent button customization and scroll functionality. Though you use the physical scroll wheel that surrounds the trackball instead of with the ball itself. There are, of course, other differentiators as well. So let’s take a look at what makes this entry different from the previous one. 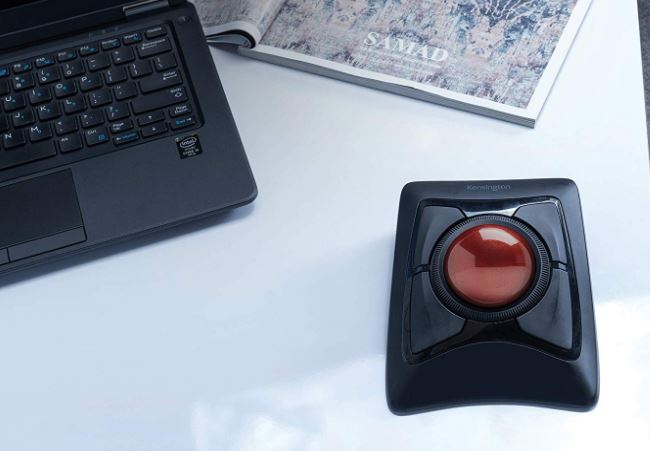 Unlike on the SlimBlade, the buttons on the Expert trackball are distinguishable due to the choice to make them a matte black color surrounded by the glossy base. Coming in at 6 x 4.92 x 2.76 inches and weighing only 1.35 pounds, this is a very portable trackball mouse. With no cable to fold up, you can travel with it quickly or place this anywhere on your desk with minimal effort. The back and of the Kensington Expert is slightly higher than the front end, causing the mouse to lean toward your hand slightly. Though you can use it as is, the experience is much more comfortable when you attach the included wrist pad. 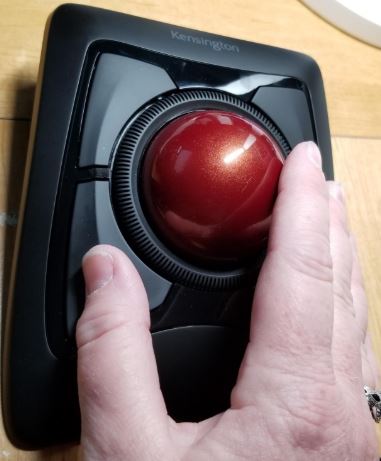 The use of Bluetooth 4.0 LE makes this a high-speed and stable Bluetooth connection; however, it isn’t quite as good as Bluetooth 5.0. This mouse was released right before the release of Bluetooth 5.0, which is its only downfall. Where it makes up for this is the option to use a USB nano receiver that utilizes a 2.4GHz wireless signal. The use of 2.4GHz not only makes up for the lack of Bluetooth 5.0 but also gives you the added compatibility of using this trackpad with computers that do not have Bluetooth capabilities. The good thing here despite not being 5.0 is that it utilizes the LE technology. LE stands for low energy, which significantly extends the battery life of the Expert mouse. 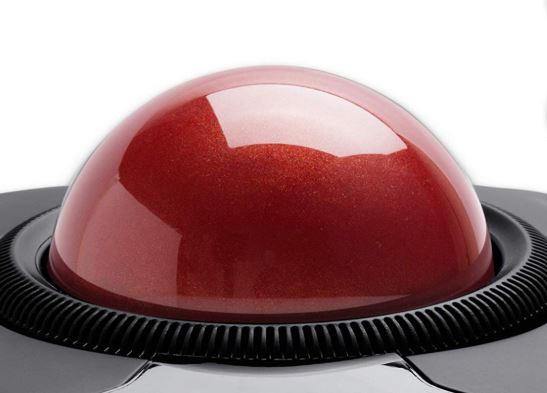 This trackball mouse has a detachable wrist rest that cradles the wrist for those of us with dainty wrist syndrome and who enjoy a comfortable wrist pillow. The added wrist support can help prevent pain from holding a high angle while using a mouse. A great feature of this mouse is the ability to set the software to different modes depending on your usage. You can set the mouse to launch system menus or programs, you can set it to media mode for play and pause of forward and reverse functions, and of course, there are others.

Using the Kensington configuration software “TrackballWorks” is what makes the mouse so great though you should note that the software customization only works when using the 2.4 GHz USB receiver and not on Bluetooth. One feature writers, programmers, or just individuals that send out a lot of repetitive emails, might find useful is the text snippets feature. With the software, you can program buttons to enter pre-defined snippets of text like macros on a keyboard. You can even configure one button for copy and another button for paste so you can modify documents quickly. Surely you can use your imagination a bit and see how these customization features can be incredibly useful for your particular use case. 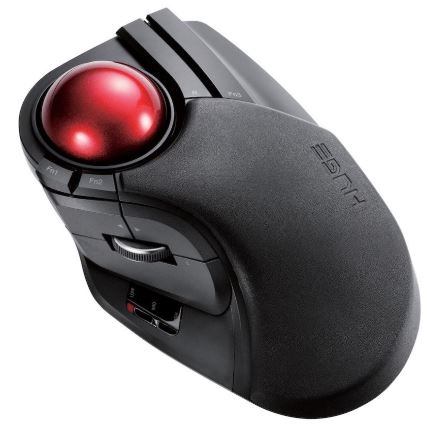 This is the only entry on the list today that isn’t a Kensington product. That isn’t the only thing that separates the Elecom M-HT1DRBK either, as it’s also the only mouse on today’s list that isn’t designed symmetrically with the trackball in the center. With the M-HT1DRBK, you get a mouse that looks a lot more like the conventional mice you are familiar with, though it’s likely a bit larger than your standard desktop mouse. The scroll wheel on this mouse also doubles as a tilt wheel so you can scroll both vertically and horizontally. 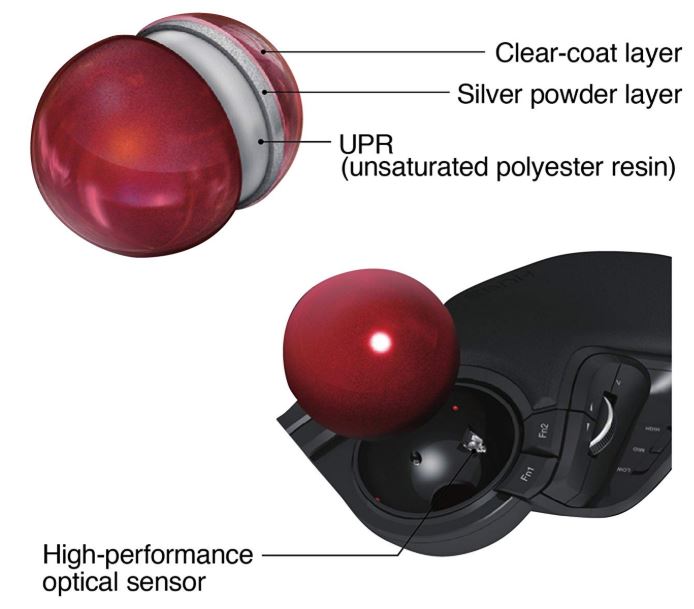 This is a mouse that fits very snugly in your hand. However, only right-handed people can enjoy this mouse (sorry lefties). The trackball is on the top left, where the LMB would usually be. Though the design looks great, the placement of the trackball forces you to use your right pointer finger instead of being able to balance your usage like with a centrally located trackball. This mouse has a total of 8 thumb and finger buttons. These buttons were designed with MMO and real-time strategy gaming in mind.

Optical tracking on the Elecom M-HT1DRBK makes this on par with the Kensington Expert in terms of technology. With the added benefit of easily pressed DPI buttons near the thumb placement, you can increase or decrease the mouse speed to your preference. The mouse also has synthetic ruby support bearings to increase the smooth rotating experience of the trackball and decrease rotation resistance. The M-HT1DRBK utilizes a 2.4GHz USB adapter for the signal, so for those of you hoping for one contender to use Bluetooth 5.0, you are out of luck today. 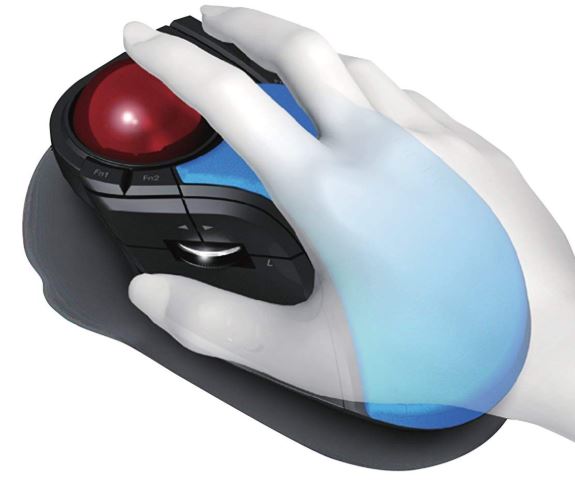 If you happen to be Japanese, you can utilize the free Elecom mouse assistant software to assign up to ten functions to the buttons and tilt wheel. This software is similar to the previously mentioned Kensington TrackballWorks software; however, it’s only available for Japanese consumers. The excess buttons and button custom control make this an excellent mouse for gaming. The use of tactile Omron switches on the left and right buttons makes for satisfying click feedback that also happens to be incredibly durable.

Which Trackball Mouse is Right for Me?

Some definite personal preferences come into play when deciding between these three trackball mice. If you prefer the traditional mouse design and happen to be right-handed, then the Elecom M-HT1DRBK is an excellent option. The fact that they have software that is only usable if you speak Japanese makes this great for anyone that is familiar with the language but results in a crippled experience if you do not. For that reason, the over-reliance on the pointer finger, and with the lack of left-hand functionality, the Elecom M-HT1DRBK mouse is the bottom of the pack this time.

The Slimblade’s low profile makes it the sleekest of the three. When combined with the glossy design, this is a trackball mouse that looks great on any desk. It’s also the most durable of the three mice as well due to its metal frame and precision engineering. This is a phenomenal trackball mouse for those that do not mind the cable connection.

If wireless is a selling point, then there is only one option you should consider today. The Kensington Expert gives you the excellent engineering of Kensington products with the added benefit of multiple wireless connection options. Despite the use of optical LED over laser, the tracking is still impeccable, and with the added detachable wrist wrest makes this the most comfortable mouse to use of the three. We found the Expert the most convenient and most enjoyable to use. 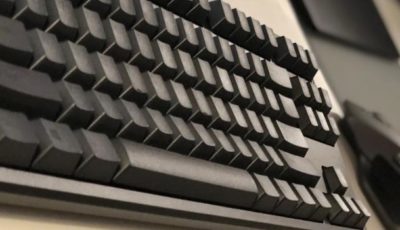